Barbecue is a quintessential American cooking style. Various states and regions, such as Texas, Memphis, the Carolinas, and Kansas City, have their own unique methods of barbecuing. Competitions are held around the country to decide whose barbecue reigns supreme. Cooks from each region have different ideas about the best type of meat, blend of spices, type of firewood, level of heat, length of cooking time, and so on. Texas barbecue “pitmaster” Wayne Mueller, who visited Japan in 2015 for a program sponsored by the Embassy, said, “The topics that are most likely to stir up an argument when you meet Americans for the first time are politics, religion, and barbecue.”

Many of the diplomats working here at the Mission love barbecue, and they all have their own personal opinions about it. This series of articles will introduce American culture and history from the perspective of “American Diplomats and Barbecue.”

Barrett Bumpas, who is originally from Texas, works at the Agricultural Trade Office of the Embassy, so he knows his barbecue. “When I was a kid, my dad built a big smoker (barbecue grill) on a trailer and put it in the back yard,” he said with a smile. Texas barbecue is all about beef. What is especially popular is “brisket,” which comes from the chest of the cow, seasoned with salt and pepper and smoked for  10 to 15 hours. By the way, “grilling” is a method of cooking meat and other foods at high heat over charcoal or an open fire, and “barbecuing” is a method of smoking meats for longer periods over relatively lower heat. The two methods are often mixed up and collectively called “barbecue,” but they are actually different. 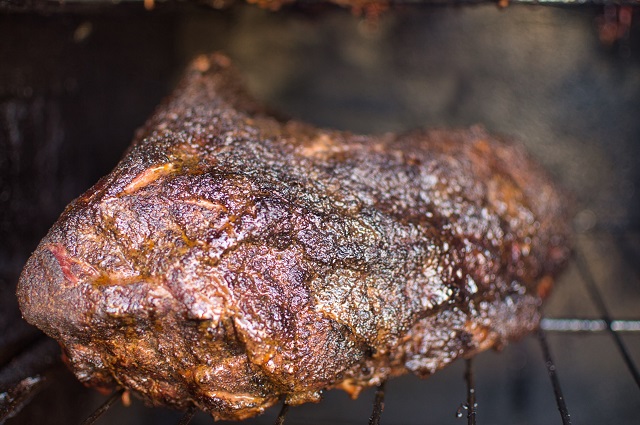 The “cowboy” is virtually synonymous with “Texan”—a symbol of the Lone Star State—going back to the days  of raising cattle on the open plains. Texas is the U.S.’s top beef producing state, boasting a cattle industry valued at more than $12 billion. Before refrigerators were widely used, the ranchers in the southern state faced a major challenge in figuring out how to preserve so much meat. The technique of smoking inexpensive cuts of beef at low temperatures to produce delicious and less perishable meat was apparently handed down through the ages and led to the development of smoked brisket.

Barrett said that when his dad first fired up his new smoker, the brisket turned out a little tough and chewy. Barrett, who was in high school at the time, and his father tended the fire together and experimented with various cooking methods.  Through trial and error, they fine-tuned their smoking method, and now their barbecue is indispensable at family gatherings. After smoking meat for five or six hours, a pink “smoke ring” starts to appear around the edge of the meat, although it depends on the size of the brisket. After that, they wrap the meat in aluminum foil to keep in the juices and cooks until the muscle fibers break down, turning the normally tough cut into tender and juicy meat.

The town of Lockhart is known as the “Barbecue Capital of Texas,” and according to Barrett, “Any serious barbecue road trips should include a stop in Lockhart.” Austin is well known for barbecue as well.  The owner of a popular restaurant in Austin, known for long lines of customers that form outside, even teaches an online course that Barrett has taken to help improve his understanding of barbecue. Texas barbecue is cooked by smoking large hunks of beef (though baby back pork ribs are acceptable too) using local firewood, usually post oak, for many hours. Sometimes great barbecue places can be found in the middle of the suburbs. Searching for tasty barbecue could be a fun way to explore America.

“I think of my home state of Texas and my family whenever I barbecue,” which he enjoys doing on holidays using the smoker in the Embassy’s housing compound, Barrett said. Generally, keeping it simple, with salt and pepper as the key seasonings, is the Texas way to bring out the maximum flavor of the meat. But, Barrett adds some of his family’s own original blend of spices, such as paprika and garlic powder, passed down from father to son.  When he returned to Texas at the end of last year, he enjoyed barbecuing with his father, relatives, and friends, he said. They cooked seven briskets, serving two for their family get together, putting two in the freezer to have later, and giving the remaining three neighbors and friends to express gratitude. Barbecue even plays a role in deepening community ties.

“This is the smoker my father built,” Barrett said, showing me a photo of a unique-looking grill, unlike any that could be found in a store. Barrett told me that the two “Ts” on the pit stand for Texas Tech University, where he, his father, and his brother went to school. Through talking about barbecue, I sensed the “Texas Pride” of a family with deep roots in the state. 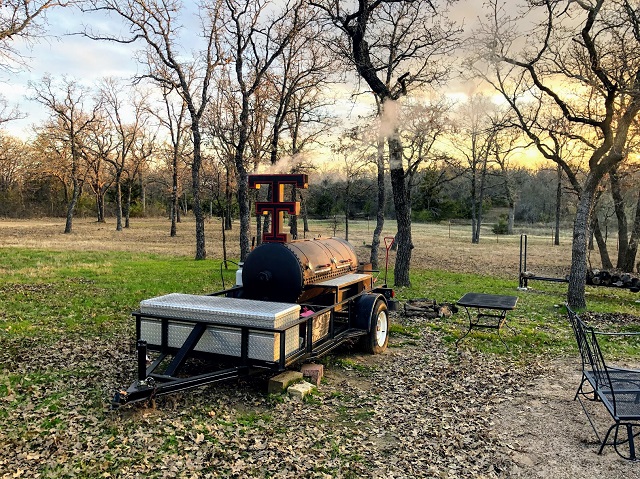 Barrett’s stories about barbecue were filled with his memories of his father, bonds with his family and friends, and love for his home state of Texas. Talking with him made me realize that barbecue culture can offer insights into what it means to be an American. In my next article, I’ll interview Margaret Hsiang of the U.S. Embassy’s Political Section and her husband, Todd, who will introduce you to Memphis barbecue.