Barbecue - American Cuisine at Its Best

Barbecue is a big part of American cuisine. On Memorial Day, people gather with their friends and family to enjoy barbecue in their backyards. American food sounds hearty and simple, but when it comes to barbecue, some Americans can get pretty serious. Did you know that really good American barbecue takes 15 to 17 hours to make? You can marinate the meat or rub it with a blend of spices and then either smoke or roast it in a lidded barbecue grill for a long, long time to trap the juice inside that thick slab of red meat.

In the States, barbecue experts are known as "pitmasters," since they're highly skilled in the use of smoke pits to cook meat. They're almost like Japanese shokunin (master craftsmen) in terms of how much respect they get. In order to introduce you to the ways of pitmasters, I interviewed Wayne Mueller, the owner and pitmaster at one of the top barbecue restaurants in Texas, Louie Mueller Barbecue. We were joined by Craig White, Wayne's student in the art of barbecuing, who owns his own barbecue restaurant in Japan Wayne is not only meticulous about controlling the heat of the grill, but he also pays very close attention to other aspects of the cooking, such as the way the meat is sliced to suit the particular cut of beet, the choice of woodchips for smoking (as well as the humidity in the chips), and the convective flow of the smoke. He even designed his own barbecue pit! Wayne is a true pitmaster, and his craftsmanship and attention to detail remind me of a sushi shokunin.

Craig told me that there's no certificate for a pitmaster. Rather, the simple and slightly exaggerated title was invented by the media to describe a person who is really great at barbecuing. The title was used in a 2009 TV show called "BBQ Pitmasters that showcased people "pitting" their barbecuing skills agains each other. Wayne exemplified the spirit of a craftsman by telling me: "If you want to create a better product, you have to be humble and can't satisfy yourself by saying you're a pitmaster."  A consummate shokunin! Now let's delve into the world of American barbecue and proud American pitmasters!

Barbecue cooking has a long and interesting history that developed along with the country itself. The name barbecue is thought to have come from “barbacoa,” which is a cooking method used by indigenous people in the West Indies around the time Columbus arrived in the New World. Barbacoa uses skewers to cook meat at a distance from the fire. Some say the word means to “cook whole.” 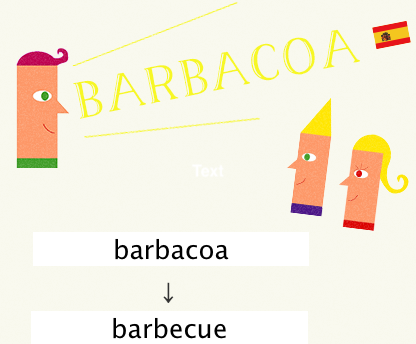 This cooking method was brought to North America by the Spanish and spread to the West by other European immigrants. These Europeans had brought with them different cultures and cooking styles from various parts of Europe, and because of that, we have a variety of barbecue styles in the States today that differ from region to region. By the way, the main route that barbecue travelled and the surrounding area are known as the “BBQ Belt” today.

Although people have many different opinions and traditions about American barbecuing methods, most agree that there are four main regional styles. The next region is Memphis, Tennessee. Memphis barbecue also uses pork, and it is either “wet,” which is cooked with sauce, or “dry,” which is rubbed with spices and herbs.

I’ve heard they ate more pork in these two regions because the southern part of the country was heavily forested before the Civil War, and it was easy and cheap to raise pigs because they just roamed the woods without needing to be tended. That’s why in the Carolinas and Tennessee, many people who are into barbecue believe that barbecue equals pork.

The third region is Texas. That’s where barbecue finally came into contact with beef! Beef was brought in from Mexico when the region was under Spanish rule. This was also when beef became more than just a local food, but I’ll talk about that later. Texas barbecue involves cooking cheap cuts of beef at low temperatures for a long time until they’re very tender. 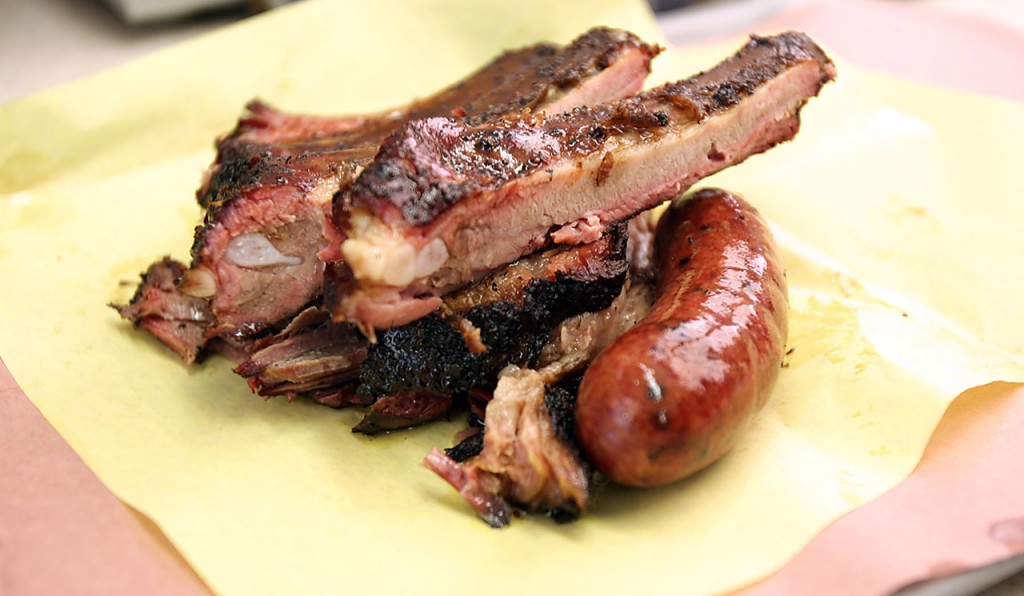 The last region is Kansas City, Missouri. A long time ago, this was the center of the livestock industry. It’s famous for steak and barbecue to this day and still known as “Cowtown” and “The Barbecue Capital of the World.”

Until World War II, Americans ate more pork than beef. Then in the fifties pork and beef were consumed in equal quantities, and beef gradually became more popular throughout the sixties and seventies until beef consumption was more than double that of pork. One of the reasons people started eating more beef was that more and more Americans bought houses in the suburbs and started enjoying recreational backyard barbecuing.

Maybe they found it easier to cook beef than pork, which can carry parasites. Barbecuing is a method of cooking meat slowly with smoke that is suitable for cooking pork. But backyard barbecue chefs tend to be dads, and not all of them are experienced cooks.

By the way, the most popular cuts of beef for barbecue are “brisket” (D in the diagram below) and “ribs” (B). Japanese people may not be very familiar with the name “brisket.” It is the inner chest muscle of a cow located near the front legs. Ribs, on the other hand, come from the rib cage. And then there is “prime,” which is a high-grade, very tender cut of meat with superb marbling. American beef comes in a wide variety of grades, ranging from healthy red meat to richly marbled cuts.

Speaking of Southern cooking, have you ever heard of “soul food”? In Japan, soul food often means local cuisine or mom’s home cooking. In the States, however, soul food refers to traditional African American cooking. It’s like a culinary version of soul music. Pitmaster Wayne told me that barbecue has been deeply influenced by soul food.

The ingredients of soul food tend to be inexpensive cuts of meat that even people who couldn't afford pricier cuts were able to obtain, like organ meats that were otherwise discarded. They cooked the meat using the traditional methods their ancestors brought with them when they came to America. Barbecue also developed as a way to make tender and tasty dishes using inexpensive meat. They both evolved through the skills and imagination of people who worked to create delicious meals with limited resources.

Where to Go for Barbecue