Kids Use Art to Honor Women’s Right to Vote

What does the history of American women’s voting look like to children from all 50 U.S. states?

To celebrate the centennial of the ratification of the 19th Amendment to the U.S. Constitution — which gave many women the right to vote — the White House created an art contest for anyone under the age of 18 to submit a visual representation of individuals, symbols or events related to the women’s suffrage movement.

Starting in the 19th century, the women’s suffrage movement fought for the right to vote in both local and national elections. The first victory was the ratification of the 19th Amendment on August 26, 1920, which granted white women the right to vote, partially realizing our founding ideals 100 years ago, and fully realizing them in 1965 with all women, regardless of race, being able to vote. 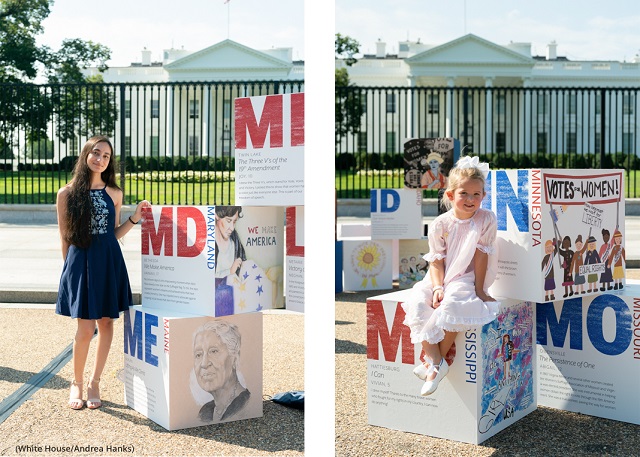 (Left) Vainavi, a 17-year-old student from Bethesda, Maryland, poses for a photo by her artwork during the opening of “Building the Movement: America’s Youth Celebrate 100 Years of Women’s Suffrage” August 24. (Right) Vivian, a 5-year-old student from Hattiesburg, Mississippi. (White House/Andrea Hanks)

“Because of the story of progress ignited by the women’s suffrage movement, we can all continue to look forward to the important achievements that women of all ages will make in our society,” said first lady Melania Trump on August 24 at the opening of the exhibition.

Works chosen for the exhibition showed a wide range of artistic interpretation of the movement. Some depicted the diversity of women’s rights activists — commemorating figures such as Ida B. Wells and Alice Paul — while others represented the movement through abstract forms. 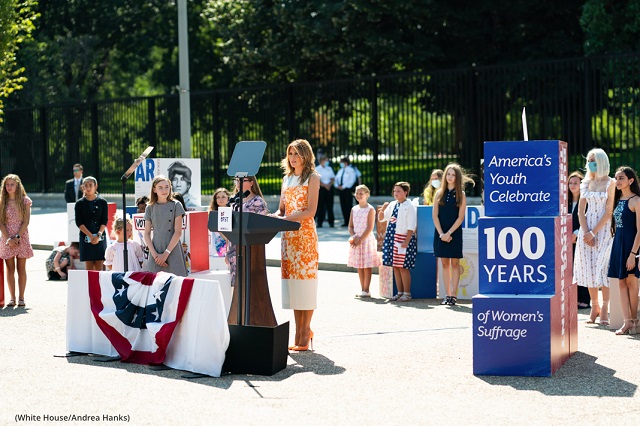 The unifying themes are the right of all women to vote, regardless of race, and a celebration of democracy.

“We, as women, must continue using our greatest tool of empowerment — our voices,” Trump said. “Now in 2020, the American woman’s voice is more important than ever.”