Taste of America 2019: Taking Chowder to the Next Level

What do you think of when you hear the term “chowder”? A hearty bowl of creamy white soup filled with clams and potatoes and served with crackers? Although that type of chowder, known as New England clam chowder, is probably the most common, it’s certainly not the only kind that’s available in the United States today. The American Northeast is traditionally known for its regional varieties of chowder, and cooks across the country are constantly coming up with innovative new versions of this classic American comfort food.

Chowder is one of the themes of this year’s “Taste of America” campaign, in which restaurants in Japan offer special menu items incorporating American ingredients during the first two weeks of October. The U.S. Agricultural Trade Office in Japan has teamed up with suppliers of American agricultural products and about 30 eateries to organize the campaign, which is aimed at introducing a diverse array of American food and agricultural products to Japanese restaurateurs and restaurant-goers. 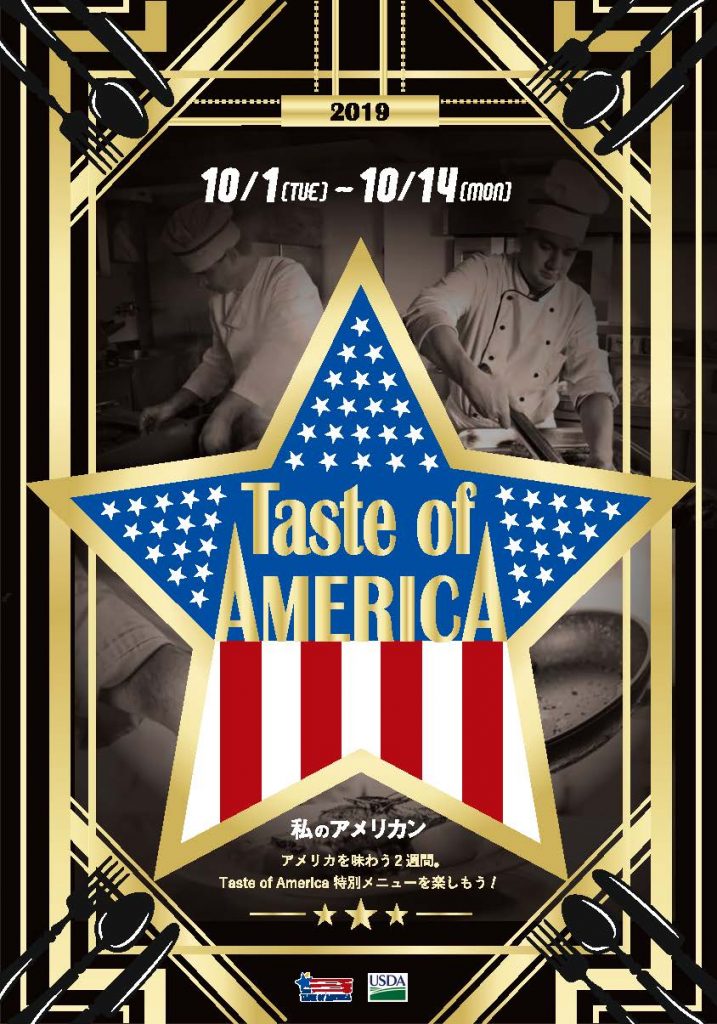 At an August 20 Taste of America kick-off event at Meidi-ya Hall in Kyobashi, Tokyo, Executive Chef Katsuichiro Kibe of Lawry’s The Prime Rib, Akasaka, demonstrated how to make Rhode Island clam chowder. The restauranteurs, food importers, and media representatives in attendance were surprised to discover that the soup was a clear, briny broth instead of the creamy clam chowder they were accustomed to. During the demonstration, Chef Kibe talked about how he enjoyed sampling different varieties of chowder when he was working in the United States. While New England clam chowder is white, he explained, Manhattan clam chowder is red on account of its tomato-based soup. The Long Island version, on the other hand, is like a cross between the two, with cream and tomatoes playing equal parts. 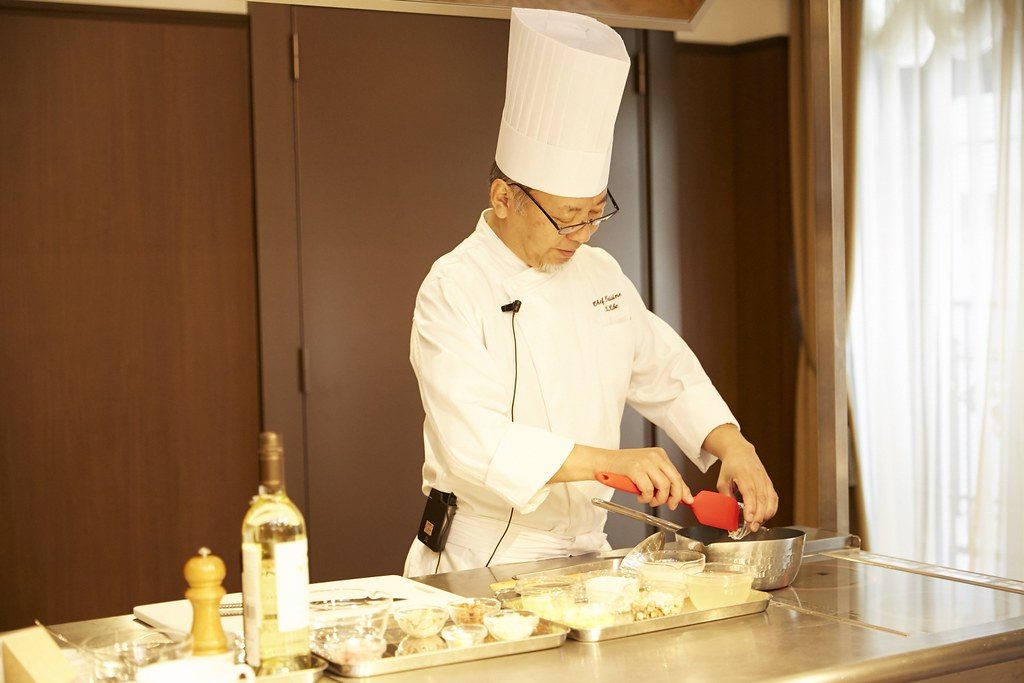 Most types of chowder contain clams or other seafood, such as fish or lobster, but there are also versions that give the leading role to meat or vegetables. The word “chowder” is thought to have originated from the French word chaudiere, a pot in which French fishermen in the 16th and 17th centuries made stews containing salt pork, ship’s biscuits, and seafood. While today’s chowder can contain many different ingredients, it’s generally a chunky soup, as opposed to a smooth puree, known as bisque. Corn chowder is popular in the Southern and Midwestern states, and Mexican-style chicken chowder is a healthy new take on the soup that borrows a hint of spice from America’s southern neighbor.

For the Taste of America campaign, many of the participating restaurants are debuting innovative chowder recipes incorporating U.S. products. American Bistro NIA in Nihombashi is offering a Maryland crab soup filled with large pieces of crab as well as American corn, pork, kidney beans, and Old Bay Seasoning, a blend of herbs and spices that is commonly used on the East Coast. Longboard Café in Aqua City Odaiba has come up with a colorful rice-based clam chowder dish made with American-grown Calrose rice and topped with Alaskan smoked salmon and California black olives.

Boston Oyster & Crab in Tokyo Midtown Hibiya is sticking to tradition by offering a New England clam chowder made with American clam juice and cod, while TAVERN Corner is presenting a unique take on the soup with a spicy Tandoori chicken chowder featuring U.S. bone-in chicken thighs and topped with an aromatic herb salad.

In addition to the chowder theme, this year’s Taste of America campaign has a sub-theme, “My American Food,” for which local chefs and restaurant proprietors are encouraged to come up with their own interpretations of American cuisine. Lawry’s Executive Chef Kibe demonstrated the theme at the kickoff event by preparing gourmet sandwiches stuffed with the juicy prime rib and creamy horseradish that Lawry’s is famous for along with kale and whole boiled eggs, sliced in half diagonally for a striking presentation. He explained that Americans love to dream up unusual combinations of ingredients for sandwiches and he wanted to create one featuring ingredients from his own restaurant. 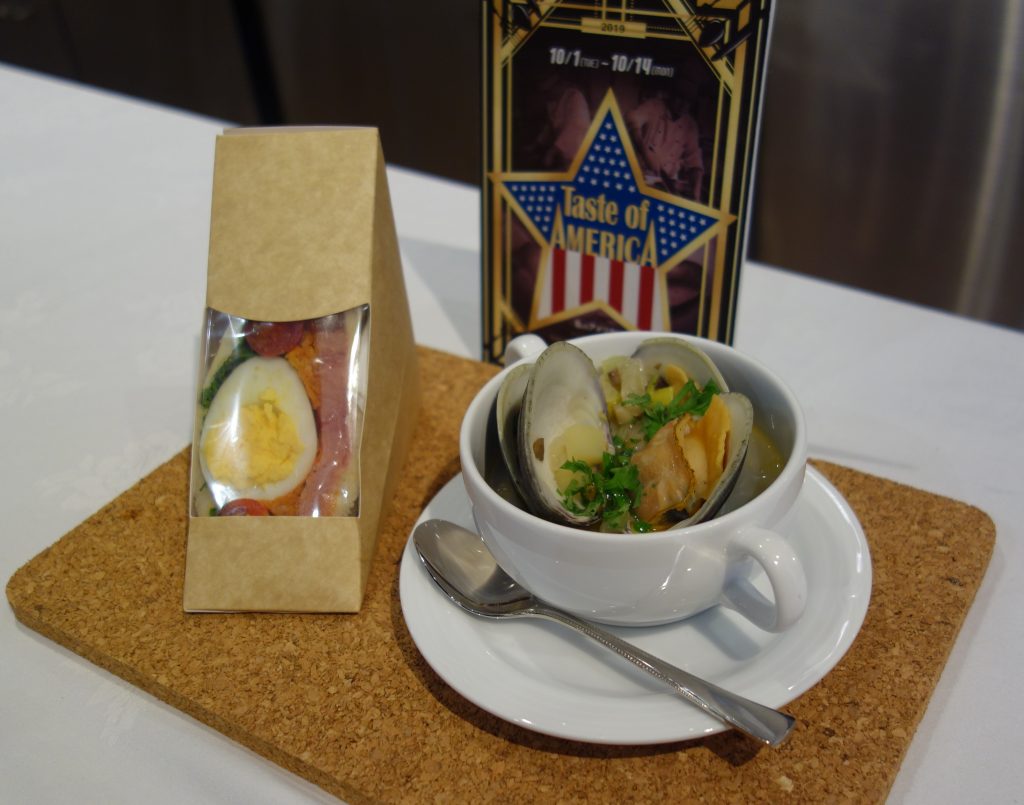 Sandwiches are certainly an all-time American favorite, and Empire Steak House in Roppongi is offering its take on the classic clubhouse for its “My American Food” item.  Served as a perfect accompaniment to the restaurant’s creamy crab chowder, the sandwich features thickly sliced bacon, grilled chicken, and melted American cheddar cheese. Brooklyn City Grill located in Tokyo Midtown Hibiya is letting its customers create their own pulled pork tacos by tearing off pieces of tender, slow-cooked American pork seasoned with the restaurant’s original spice rub and wrapping them in tortillas together with lettuce, tomatoes, salsa, and three different sauces.

Desserts are an important part of any great meal, and pie is often said to be the quintessential American dessert. All Bubby’s locations will be cooking up cherry pies made with Michigan sour cherries throughout the Taste of America campaign. Another sweet treat you won’t want to miss during the campaign is Longboard Café’s pancakes topped with American peanut butter, walnuts, and blueberries.

Taste of America is an excellent opportunity to experience the great taste and wide variety of American agricultural products. The participating restaurants, ranging from simple burger shops to fine dining establishments, feature not only traditional American cooking, but also Mexican food, European fare, and vegan offerings. Most of the menu items will only be available from October 1-14, so plan your schedule accordingly so you can try some of the participating restaurants’ unique takes on chowder and American cuisine.

Additional information and a complete list of restaurants participating in Taste of America 2019 is available here.