Growing up in Los Angeles, I ate ordinary white bread. But then one day in high school, I heard someone mention bagels. I asked a friend what a bagel was, and she said, “It’s like bread but shaped like a doughnut.”

I failed to comprehend. Why would anyone make doughnut-shaped bread? I just put it out of my mind. Little did I know that I would later end up in upstate New York, where I experienced a bagel awakening. I quickly discovered that bagels are not quite the same as bread. Bagels are boiled in water before they are baked, which gives them a chewiness that distinguishes them from ordinary bread. Soon, I was making regular visits to the bagel shop next to campus. I found the chewiness oddly satisfying and addictive. Later, when I tasted a New York City bagel, I was hooked. 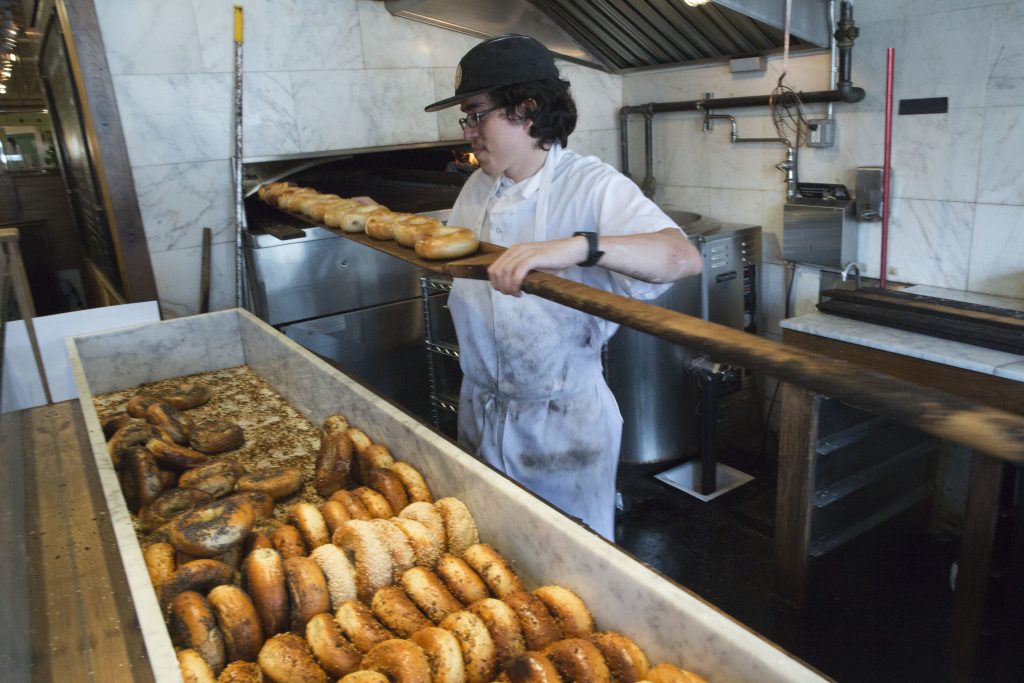 To me, bagels are a quintessential American food. Americans eat bagels for breakfast, lunch, or a snack at any time of day. There’s even a National Bagel Day—January 15.

Scholars say the bagel originated in Poland several centuries ago. According to an article by Amanda Fiegl in Smithsonian Magazine, one story has it that the bagel was created in 1683 as a tribute to a Polish king. Others say the bagel dates earlier to 1610 or even earlier to a 14th-century Polish bread. The bagel arrived in America in the 19th century with Eastern European immigrants, many of whom were Jewish. In the United States, the bagel became associated with Jewish culture, particularly that of New York City. Bagels entered the American mainstream in the 1970s when a bakery started to sell frozen packaged bagels in supermarkets.

Bagels are eaten all over America and many supermarkets carry an assortment of them in six-packs, but they are particularly popular in New York City. The bagel shops there offer many varieties of bagels and a wide range of toppings. There are many choices involved in the purchase of bagels, starting with the selection of bagel variety. Common varieties seen in many shops are: plain, sesame, poppyseed, onion, garlic, cinnamon raisin, multigrain, and “everything.” An everything bagel is a combination of the standard flavors—sesame, poppyseed, onion, garlic, and salt. Some shops even offer gluten-free bagels. For people who like bright colors, there are even rainbow bagels! These bagels are literally rainbow colored, with rows of colors swirling around to form multicolored waves. A few years ago, rainbow bagels became a hit, with people lining up outside a certain shop to buy the colorful bagels. Now, there are several shops that carry rainbow bagels, and they have even landed in Tokyo. 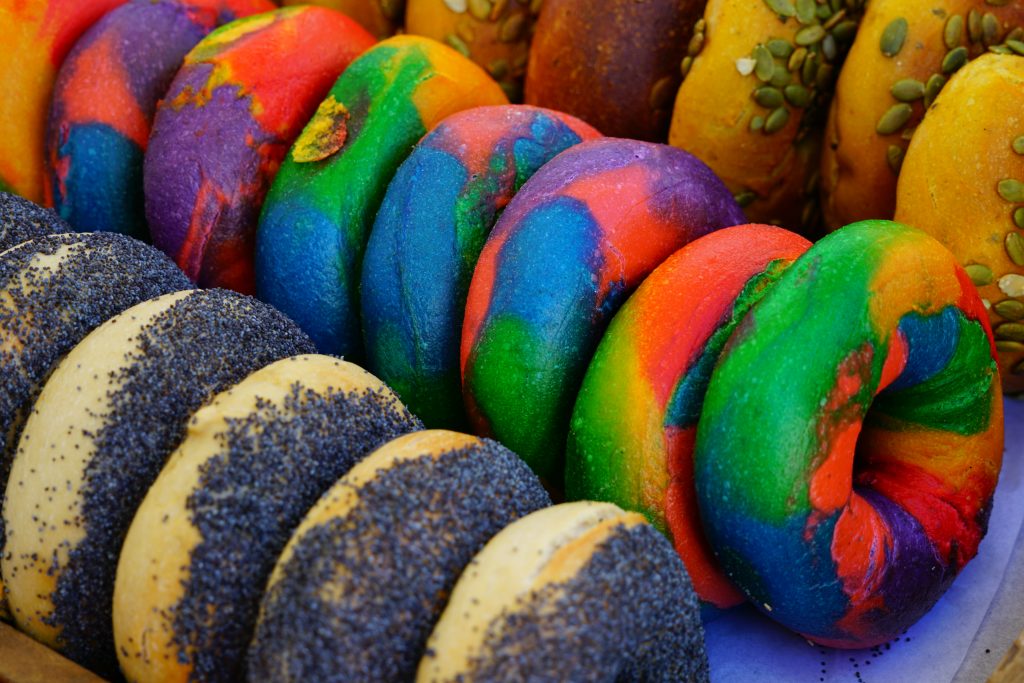 Multicolored rainbow bagels on display in a bakery (EQRoy/Shutterstock.com)

After choosing a bagel, many people have them sliced in half lengthwise so that fillings may be added between the two halves, creating a sandwich-like bagel. My impression is that bagel shops tend to be conservative in their bagel varieties but are more adventurous with their spreads and fillings. Cream cheese is a favorite spread for bagels. In addition to plain cream cheese, there are cream cheeses blended with savory items like scallions or sweet items like blueberries. There are even spreads made with tofu. The pursuit of originality has led some shops to embrace upscale ingredients and interesting flavors so that you can now get cream cheese or tofu spread with jalapenos, olives, sundried tomatoes, chocolate chips, or apples and cinnamon. One shop was even offering a decadent-sounding lobster cream cheese with tarragon for a limited time. 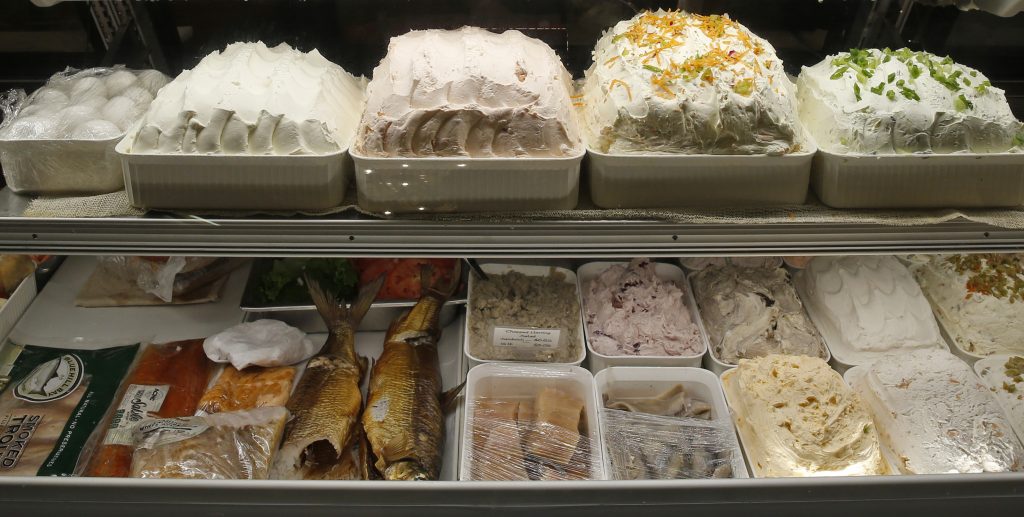 Besides spreads, you can select tuna salad, egg salad, or salad made from smoked fish. A very popular combination is cream cheese and lox (smoked salmon). You can also order pizza bagels—open-faced bagels with mozzarella and other pizza toppings—or full-fledged bagel sandwiches with roast beef or pastrami. You can even combine the spreads, salads, or meats with other toppings like red onion or tomatoes to design your own unique bagel. Feel free to be as creative as you want! And for people who love bagels so much that they want other foods to taste like them, there are packaged blends of seasonings that contain a mix of the basic bagel flavors—sesame, onion, garlic, and salt. People sprinkle the “everything bagel” seasoning on popcorn, potato chips, breads, even salads. One brand of potato chips even sells chips that taste like everything bagels. 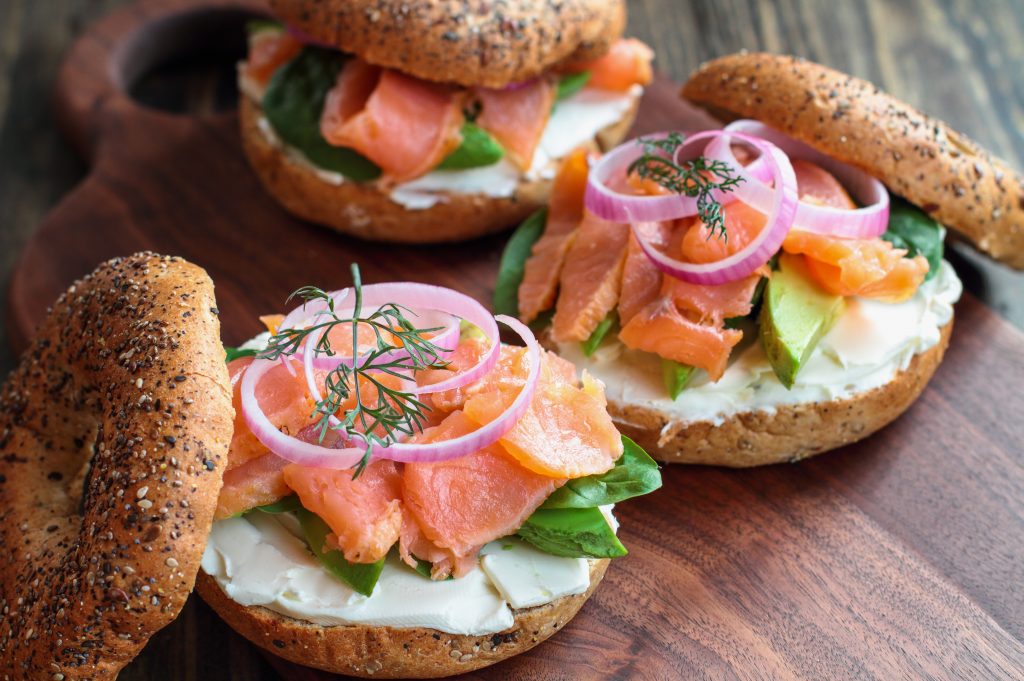 One of my college friends used to say that he wanted a bagel slicer. He would hold the bagel standing up on its side in one hand and hold the knife in the other, but if he pushed the knife down too hard, it might go cut through the bagel and cut his hand! Fortunately there are tools made exclusively for the purpose of slicing bagels in half. One type of bagel slicer is known by the picturesque name of “bagel guillotine.” Another  friend of mine from New York reckons, however, that many people still slice their bagels the old-fashioned way—with their hands. He tells me of a time he went to a hospital on a Sunday and saw several people with hands injured in the course of cutting a bagel. “Sunday is bagel day,” a hospital worker told him. 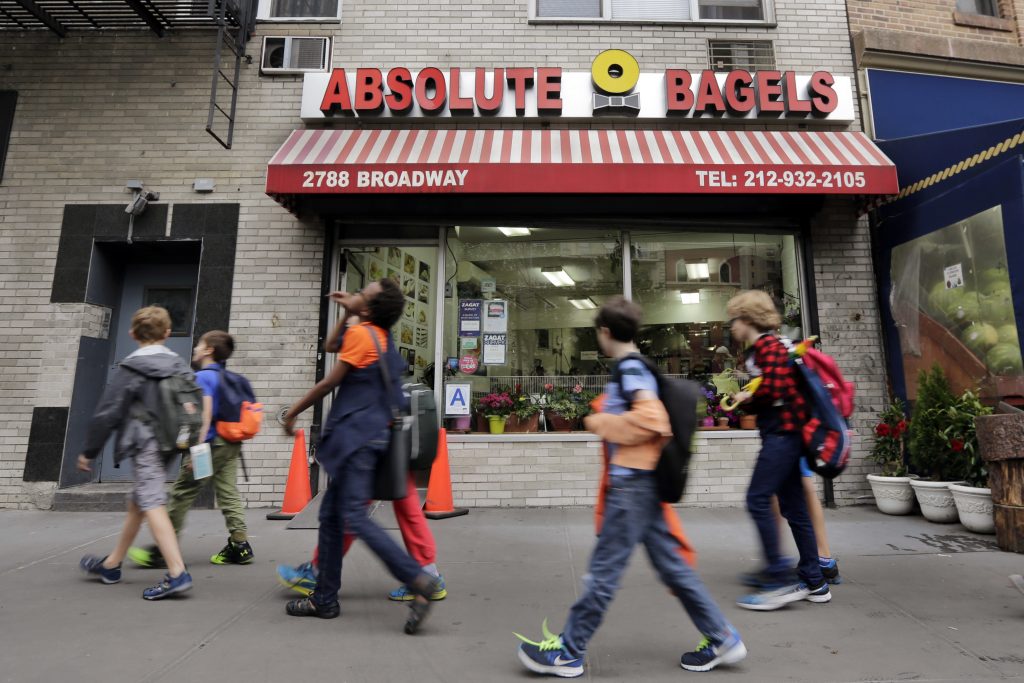 Bagel lovers can get pretty passionate about bagels. Each person has his or her own favorite bagel and way of eating it. Some swear by a particular bagel shop. When bagel lovers see bagels being consumed in a manner contrary to their beliefs, it can set off strong emotions. One day in March 2019, a St. Louis man posted a photograph of sliced bagels on Twitter, immediately sparking a vigorous online controversy. What was so controversial? The bagels were sliced vertically, like bread! This “bread-slicing” of bagels shook the core values of many bagel lovers. “Felony,” “atrocity,” and “food crime” were just some of the comments hurled at the bread-sliced bagels. Others quickly came to their defense, saying they were easier to eat or dip into multiple spreads.

After trying different bagels and toppings, I settled on an old standard: a bagel with plain cream cheese. Others may go for more exotic and unusual combinations. Perhaps that’s why bagels are so popular – they are versatile enough for anyone to enjoy. I urge you to go out and find your own perfect bagel.