Many athletes are training hard for the 2020 Tokyo Olympics and Paralympics. They’re aiming to be in their best possible shape for the ultimate international sporting event that only takes place once every four years. Aaron Wolf, a judoka with an American father and Japanese mother, is a leading candidate to represent Japan at the 2020 Olympics. I sat down with him to ask what motivates him, what makes him such a successful athlete, and what his goals are after the Olympics.

Although Wolf grew up in Japan, his American heritage might have drawn him toward football, baseball, or some other sport that is popular in the United States. Instead, he chose judo.

Wolf took up the sport at the suggestion of a relative. Although he had played a variety of sports in his childhood on account of his solid build and natural athletic ability, the more he learned about other sports, the more he came to appreciate the depth of judo. As a result, he grew increasingly passionate about it. After entering high school, he made up his mind to focus exclusively on judo. He set out to be the best. “There would be no point in committing myself to judo as my sport and my life’s work if I didn’t set the high goal of succeeding in the Olympics,” he says. 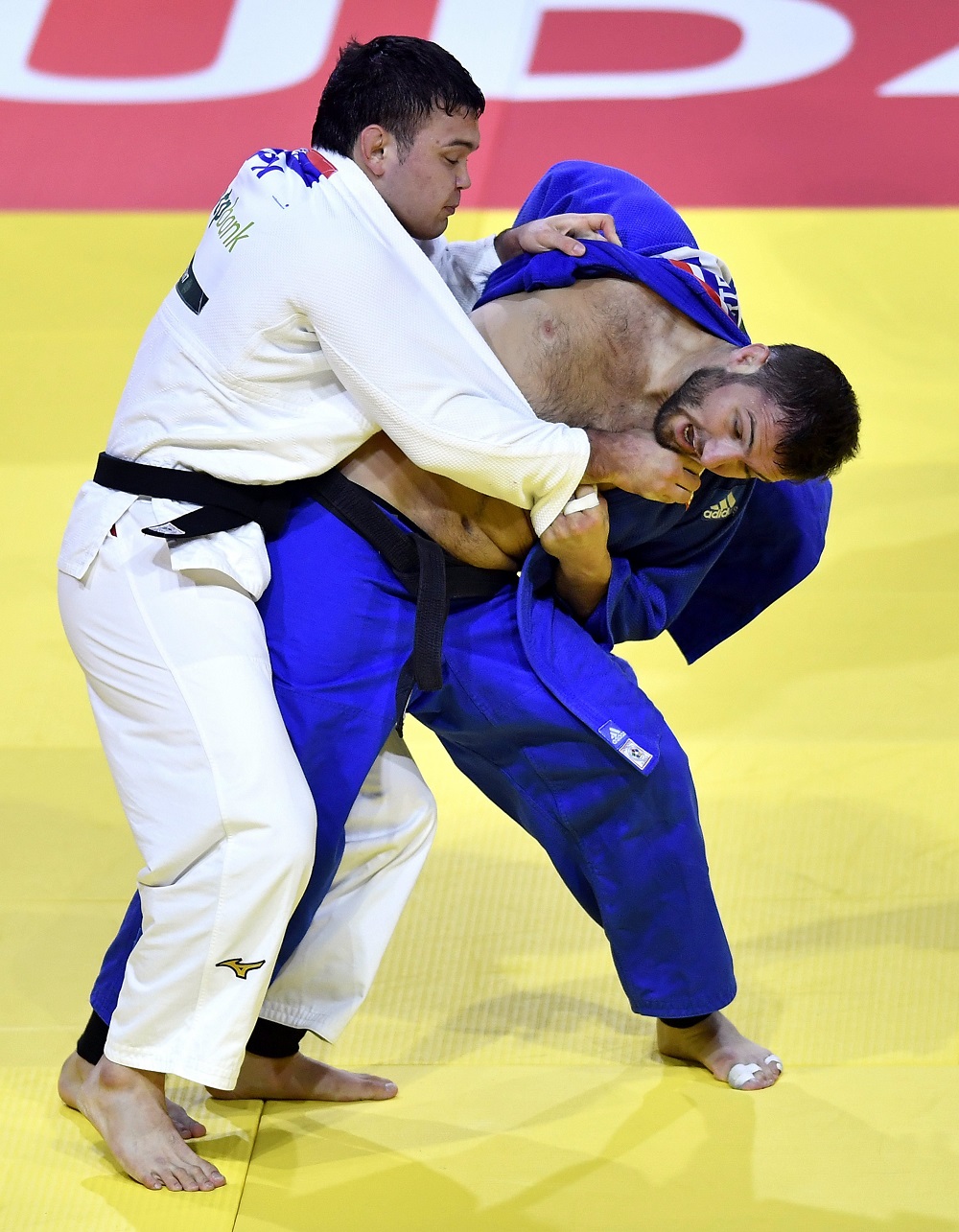 Wolf won his first Grand Prix in 2015 in Mongolia and then went on to win the Grand Prix in Tashkent in the same year. He took the judo world by storm when he won the World Championships in Budapest in 2017. After recovering from a knee injury, he captured the All Japan title for the first time in his life this April.

The attraction of judo

“You can’t win in judo if you don’t use your head,” Wolf says. Judo presents challenges that differ from those of sports that rely on times and scores to rank athletes. Judo athletes must respond to their opponents flexibly, so each match demands a unique approach. That’s why the sport is both difficult and fascinating. “The more you think, the more you can improve,” he says. He is keenly aware that the hard work he puts in is reflected in his performance on the mat. “You improve in judo by thinking about your own moves and constantly transforming yourself.” 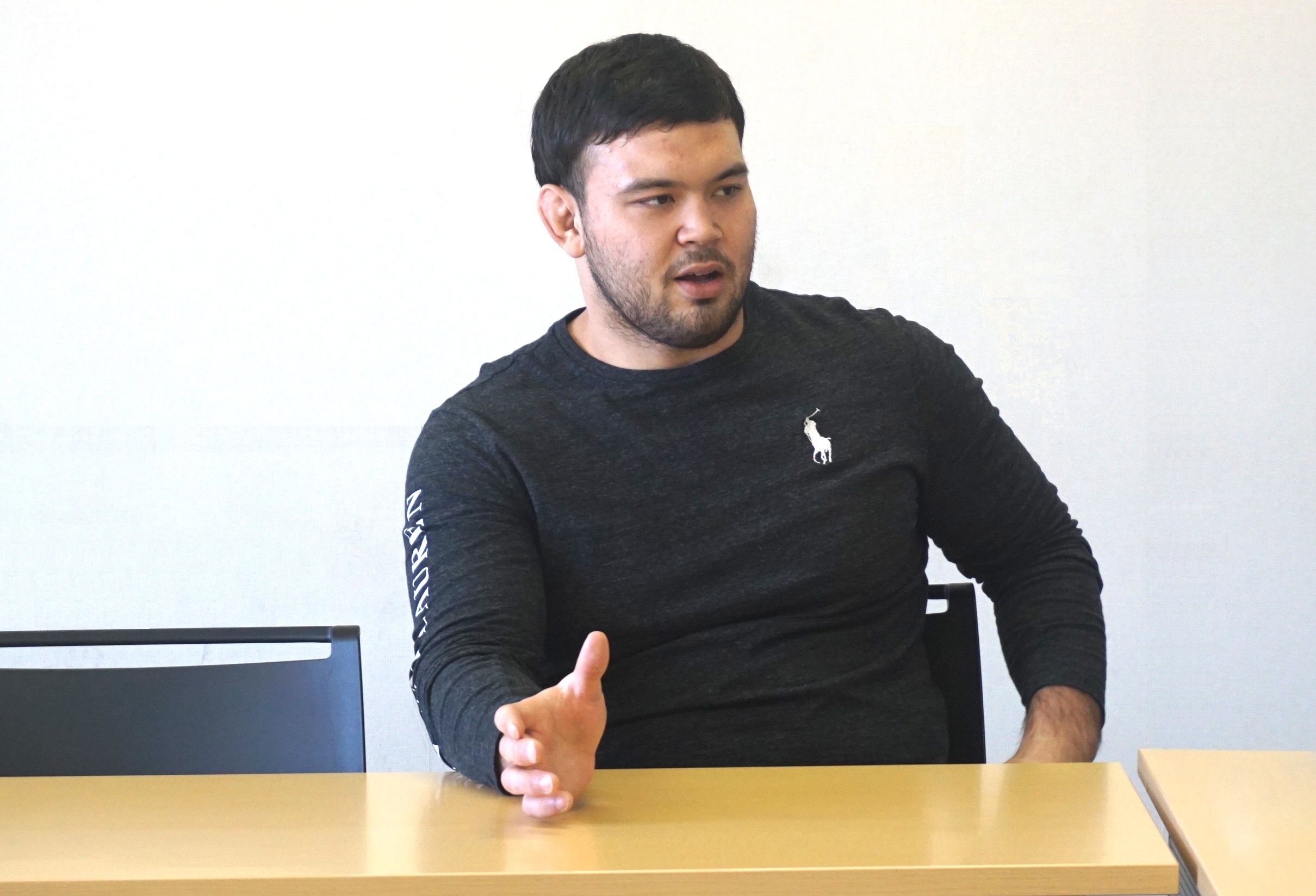 Wolf talks with "American View" about what drew him to judo.

“It’s not that I’m particularly talented at it,” Wolf confides. He believes that agility is key: In judo, you always have to anticipate your opponent’s next move and react to it in a split second. You move the match forward at your own pace by concentrating and remaining constantly attuned to your opponent. That kind of agility cannot be developed through practice alone. It is critical to develop all your senses. In other words, you must train off the mat as well, Wolf says.

Wolf’s exposure to a wide range of people has strengthened him mentally, he says. “Although my name is Aaron Wolf, I’m Japanese. That combination makes it easy for people to remember me!” he says, laughing. Of course, it’s not his name but his drive for excellence that makes him memorable. He has an ease with people, he thinks, because judo has given him so many opportunities to interact with people, particularly those who rank higher than he does. This is true even in international settings. 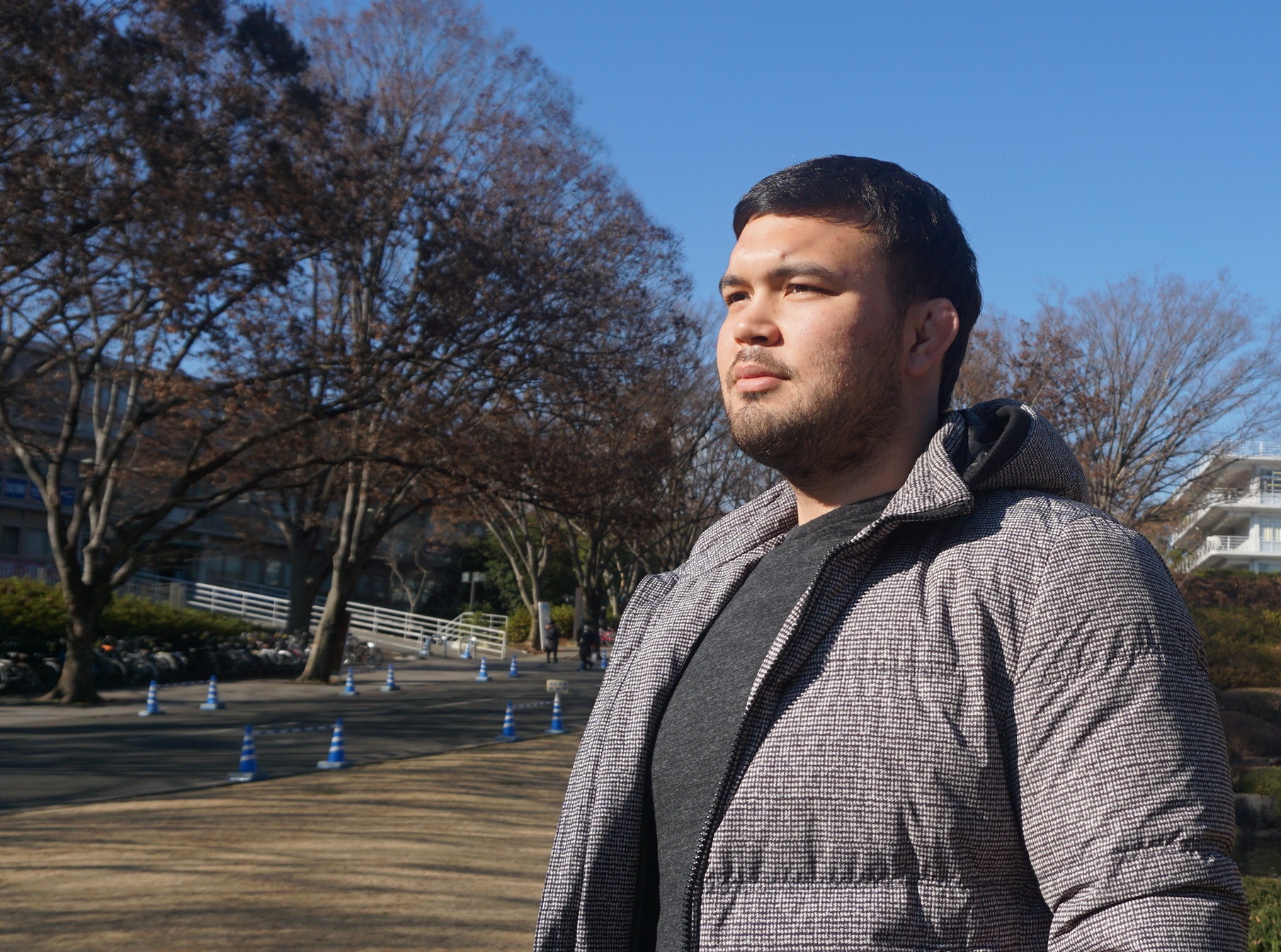 Wolf at the Tokai University Shonan Campus where he trains.

“My English isn’t very good,” he says. But that doesn’t keep him from communicating with foreign athletes. He simply makes use of the words and phrases he knows. Such communication expands his perspective and makes him more mentally agile, he says.

He says foreign athletes have taught him to respect his opponents. “Even though you play to win during the match, you commend your opponent for a good fight once the match ends. You sincerely respect your opponent even if you lose.” He says he cares more about being a respectful human being than he does about being an athlete.

The Olympics and beyond

“My goal is to win a gold medal. I need to focus on that. I can’t think about the future now,” Wolf says. He feels that the only way his hard work will pay off is if he succeeds at the Olympics. After all, the Games represent the ultimate competition for an athlete.

But the Olympics aren’t his only aspiration. He also wants to share with the world what he has learned through judo in Japan, where the sport was created and which offers an outstanding training environment.

“Leaving the judo world after I retire from competition isn’t an option,” Wolf says. He wants to develop judo both in Japan and overseas, and one of his dreams is to teach the sport in the United States someday. “I’d like to study abroad to learn coaching skills and English,” he says.

More than anything else, he wants to share his love of judo with as many people as possible. He also aspires to build ties with people through judo and grow as a person. For that purpose, he needs to compete in the Olympics and perform to the absolute best of his ability. That is what the Olympics mean to him.

Expectations are building for Wolf’s matches in the coming months. He is sure to shine brightly next summer.