Baseball played a big part of Thomas Jimenez’s childhood growing up in Santa Fe, the capital of New Mexico.

From third grade until seventh grade, Jimenez, who is now 33 and a health care worker, played shortstop and center field, first for the Santa Fe Timberwolves and then for the Nava Thunderbirds. The teams were made up of local kids from working-class neighborhoods led by volunteer coaches, and the players shared a love for the game. The fans, who were parents and friends and relatives, were especially devoted. Just practicing could bring out spectators ready to cheer and watch some baseball.

“We were really into it,” says Jimenez, whose family has ancestors from Mexico. “That’s pretty normal, I think.”

Jimenez’s experiences are typical. ¡Pleibol! In the Barrios and the Big Leagues, a special exhibit at the Smithsonian National Museum of American History, showcases how the Latino community’s passion and talent for America’s national pastime has made lasting impacts on society and culture. It features scores of artifacts, recordings of stadium songs and stories from early pioneers who changed the game forever.

“You can’t really think or talk about baseball without talking about Latinos,” says Margaret Salazar-Porzio, a Smithsonian curator who started working on the exhibit back in October 2015. “They have such an important influence on the game right now.” 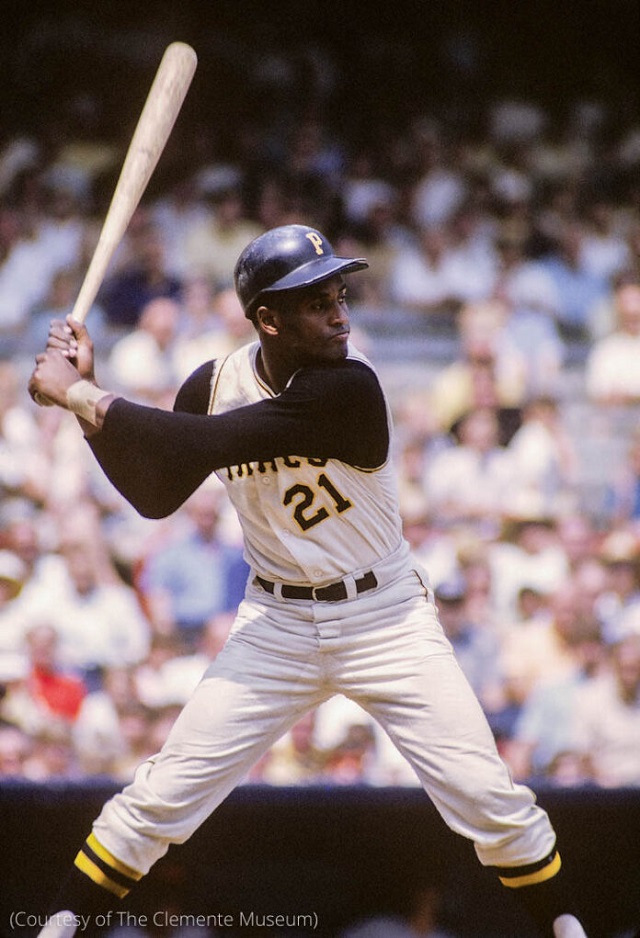 About 30% of all Major League Baseball players are from families with deep ties to Mexico, Central America, South America or the Spanish-speaking Caribbean, she says. It was important for the museum to highlight Hispanic stars like Roberto Clemente, an electric player who rose out of the baseball fields of Puerto Rico, a U.S. territory, to become one of the greatest players of the game, only to die in a plane crash months after making his 3,000th hit. The chartered plane was on a mission to deliver supplies that Clemente had personally gathered for the victims of a devastating earthquake in Nicaragua.

But equally important were the stories of other, less famous contributors like Marge Villa, who was one of only 11 Latinas drafted into the All-American Girls Professional Baseball League, the first and only such league for women. It was founded during World War II when many men were serving in the military.

The Smithsonian exhibit dives into stories from Kansas City, Kansas, in the years right after the war, when Latinos — men who’d fought for their country — weren’t allowed to play in all-white leagues. They formed their own league instead, and today that league lives on, Salazar says.

These Latinos’ and Latinas’ love of baseball is shared by millions of nonprofessional ball-playing Latino Americans. “A lot of the ways we make [a] community as kids growing up involve the baseball field,” says Salazar, who grew up a fan of the Los Angeles Dodgers, or “Los Doyers” as some native Spanish-speakers affectionally call the team.

The Smithsonian is exhibiting the team uniform Marge Villa wore when she was 13 years old and played in Los Angeles for a team called the Garvey Stars. (Gift of Marge Villa Cryan and Renée Soderquist. Photo by Jaclyn Nash/National Museum of American History)

Around game times, there are cookouts and picnics and dates with friends. Fans ring cowbells like they do in Cuba and pound on bombas, small drums from Puerto Rico. “What’s the first thing you get to eat at a game?” Salazar asks with a laugh. “Nachos!”

Out on the field, the game itself is changing as more and more Latinos like Francisco Lindor and Javier Báez rise to megastar status and bring fresh perspectives.

“If you look back at the game through the years, you’ll see it was a very, almost staid approach,” says Darian Martyniuk, a Chicago Cubs fan who takes Americans on trips through Latin America to watch local baseball games. Players from past generations didn’t show much emotion when they hit a home run or pulled off an extraordinary throw. That’s changing as the sport diversifies. “Now players celebrate these wins. They jump up and down. They point. They add a lot of feeling to the game. They’re putting in the work, so why not enjoy the wins?”

As for Jimenez, he hasn’t played baseball himself in years but that doesn’t keep him from rooting for his favorite team, the Yankees. “There was a while there was nothing [that] could stop me from playing,” he says, thinking back. “So many favorite moments.”