Historic events and outstanding devotion from military and civilian stalwarts have long been the inspiration for two prestigious awards in the United States: the Congressional Gold Medal and the Presidential Medal of Freedom.

The Congressional Gold Medal is the legislature’s highest expression of appreciation for achievements and contributions. These medals are awarded through acts of Congress. While early medals went to American citizens for their valor in the Revolutionary War, the War of 1812 and the Mexican-American War, Congress has expanded its recognition to include humanitarians, public servants, lifesavers, explorers, scientists, health experts, actors, musicians and writers. What’s more, the medal can now be awarded to foreign citizens.

The Congressional Gold Medal has been awarded to individuals (such as Dr. Jonas Salk, who invented the first polio vaccine; Holocaust survivor and author Elie Wiesel; and former South African President Nelson Mandela, an anti-apartheid leader), groups (such as the Montford Point Marines, the American Indian Code Talkers and the victims of the September 11, 2001, terrorist attacks), and those involved in notable events (such as the first successful trans-Atlantic flight). 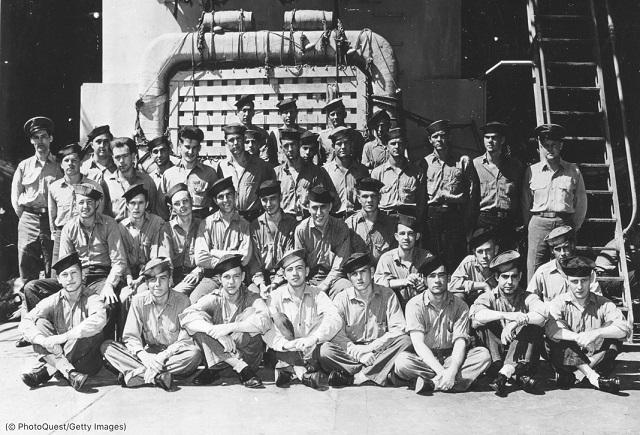 Crew members pose for a photo on the USS Indianapolis before the ship’s 1945 sinking. (© PhotoQuest/Getty Images)

In July, Congress awarded the medal to the 1,195 sailors aboard the USS Indianapolis, 75 years after torpedoes from Imperial Japan sank the cruiser in shark-infested waters. The cruiser had delivered components for the atomic bomb the U.S. dropped on Hiroshima. Roughly one-fourth of the Indianapolis crew members survived the attack. Only eight are alive today.

Retired U.S. Navy Captain William Toti got to know scores of survivors over the years and says they would not have expected the honor. “Not one crew member of the Indianapolis — not one — would ever describe themselves as a hero,” said Toti, speaking at the Congressional Gold Medal ceremony. “But they would all say that they served in a crew of heroes.”

Launched in 1963 by then-President John F. Kennedy, the Presidential Medal of Freedom is America’s highest civilian honor. The president of the United States may give it to anyone who has made outstanding contributions to American society. 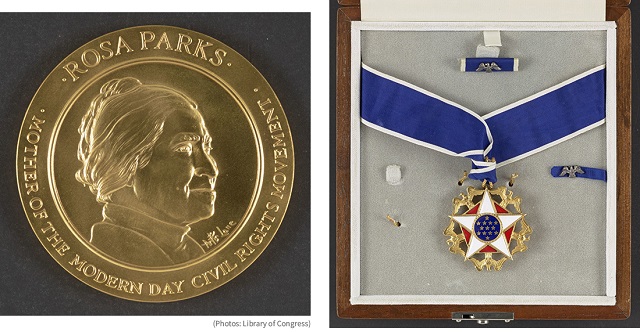 Civil rights activist Rosa Parks received the Congressional Gold Medal (left) in 1999 and the Presidential Medal of Freedom in 1996. (Library of Congress)

Rosa Parks, who helped launched the civil rights movement by refusing to relinquish her seat to a white man on a segregated bus in 1955, is among several Americans who have received both medals.