The U.S. is a Popular Place to Invest

More companies from around the world are investing in the United States than in any other nation.

“Nowhere else but in the United States will you find such an advantageous mixture of innovation, entrepreneurship, diversity, dedication to hard work, and an incredibly high quality of life,” U.S. Secretary of Commerce Wilbur Ross said in June.

Japan is the third largest source of investment into the United States, with Toyota announcing in March that it would increase its U.S. operations by $13 billion, with plans to add nearly 600 new jobs at American manufacturing plants.  What’s more, Toyota, Softbank and Denso announced a $1 billion dollar investment to help Uber develop self-driving cars and technology. 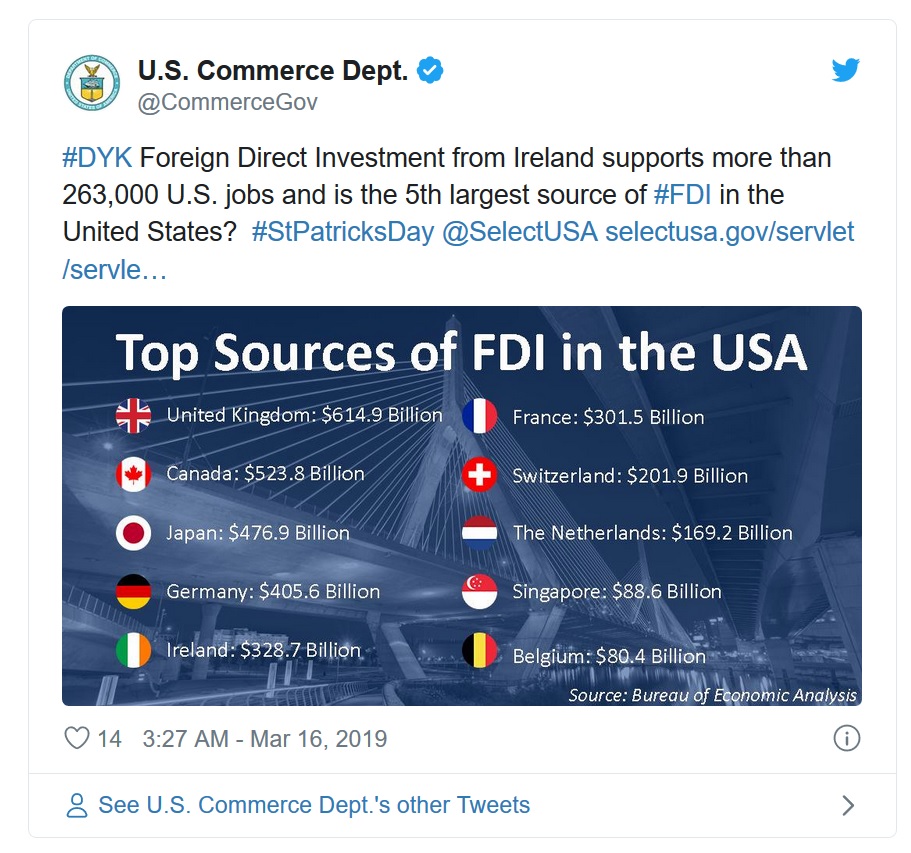 When the Takigawa Corporation was looking to expand its business, investing in the United States was a natural fit. After looking at many sites, the company decided to build a plant in Bardstown, Kentucky.

“We are exporting 40% of our production to the U.S., so we decided to have a plant in the U.S.,” said Hiroyuki Takigawa, president and owner of Takigawa Corporation Japan. “It was the best decision I made.”

Other major companies are also investing in the U.S.  Swedish tech company Ericsson, for example, plans to build its first fully automated smart factory to produce 5G-network equipment in Texas, and Italian automated-storage manufacturing company, Modula, is building a factory in Ohio because of the talented workforce there.

The U.S. Department of Commerce reports that foreign direct investment in the U.S. increased nearly 9 per cent in 2018 from the year before.

The strong U.S. economy, fair and transparent laws, the world’s largest consumer market, and a talented workforce are just some of the reasons drawing international businesses to the U.S.

“We are willing to invest in the rich, dynamic and skilled human capital of this region, who are able to work in an Industry 4.0 advanced environment,” Franco Stefani, board chair of Modula, said in June when the Italian company announced it would locate a factory and logistics hub in the Cincinnati area.

Ericsson predicts that nearly half of all mobile phone subscriptions in the U.S. will be connected to 5G by the year 2023. “We are strengthening our investment in the U.S. to be even closer to our customers and meet their accelerated 5G deployment plans,” Börje Ekholm, head of Ericsson, said in a 2018 press release.